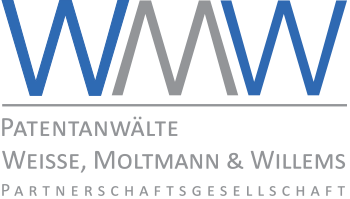 Since 1994, Jörg Weisse, the son of Jürgen Weisse, became the third generation of the Weisse family to be added to the law office team. In 1995, a branch office of the patent attorney office was opened in Berlin.

In 2006 after the death of Jürgen Weisse and the withdrawal of Dr. Rudolf Wolgast, the expertise available in the law office was expanded with the addition of Nicolas Moltmann. Until 2013, the law office was known under the name “Weisse & Wolgast”.

The two law office branches in Velbert and Berlin have been completely independent since 2013. The Velbert branch office has since merged with the Munich law office “Willems”, which was established in 1997, to form a business partnership. Since then, the law office has gone under the name of Patent Attorneys “Weisse, Moltmann & Willems” located in Velbert-Langenberg.